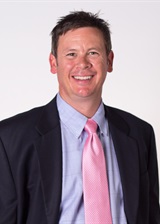 Patrick was born and raised in the Chesapeake Bay area of MD. He began his real estate career as a banker in Las Vegas in 1997. He moved from banking into single-family investments and eventually into site selection for a multifamily developer. He obtained his CCIM designation in 2010.

After starting Carolina Commercial Investment Properties, LLC in 2013 he began working with companies interested in relocating to the Cape Fear Region. He played an integral role in assisting the City of Wilmington passing the “Brewery Initiative”, allowing breweries to operate in downtown Wilmington. Patrick learned the inner-workings of Economic Development. Seeing the need for greater participation between economic development organizations and the commercial real estate community, Patrick began volunteering for UNCW’s Marbionic (Marine Biotech) economic advisory committee and the Leland Economic Advisory Committee.

Patrick has served in the following committees for the REALTORS Commercial Alliance of Southeastern North Carolina: Chair of the Professional Development Committee in 2014 & 2015, Chair of the MLS Committee, and President-Elect of RCASENC in 2016. He is currently the 2017 President of RCASENC and serves on the Commercial Committee for the National Association of REALTORS. Patrick serves as a Director on the NCCCIM Board of Directors from 2015-2018. He became and instructor for teaching Commercial Continuing Education in 2016.

He is a single father and loves surfing, cooking and traveling.